The beginner’s guide to stargazing 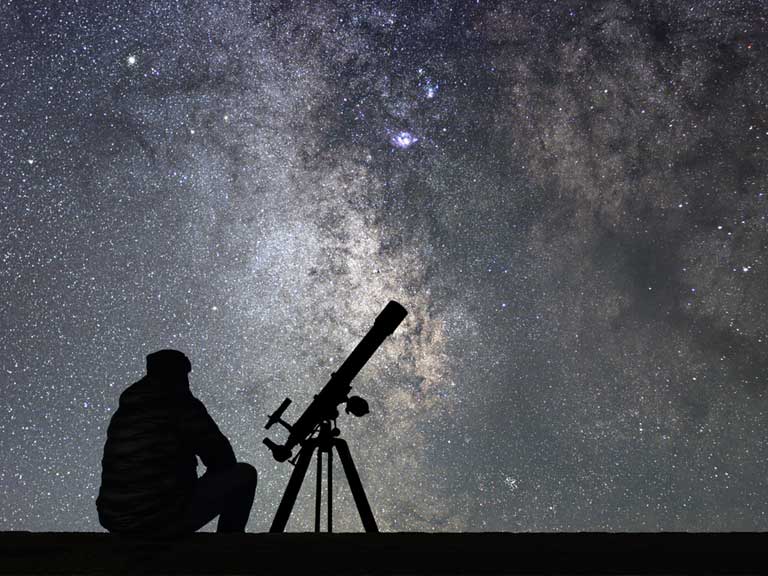 Discovering the sky at night needn’t be costly or complicated, says TV astronomer Mark Thompson. Just take one step at a time…

Step one: Don’t buy a telescope, buy a red torch

It takes between 40 minutes and an hour for your eyes to fully adjust to seeing in the dark (which will give you a much better view of the night sky), but even astronomers need a little light sometimes: to help you walk from the car to a dark observation spot or when fiddling with equipment, for instance. Any exposure to bright, especially white, light will instantly ruin your adaptation to the dark. Torches that give off a red light are much better for astronomers because they help to retain your dark adaptation. You can buy red head-torches specifically for astronomers (such as the e+LITE® Classic headlamp from Petzl for around £20) or you could use red bicycle lights, although these can still be a bit bright.

Step two: Get your sky guide

Learning your way around the millions of stars can seem an impossible task. To make things easier, download an app onto your smartphone (see Go mobile, below). These work out where you are, where you are pointing and then show you what is in the sky in that direction. You will be hunting down constellations, stars and planets in no time.

If you prefer the manual method, then spend a few pounds on a planisphere. These maps of the sky are easy to use and will show you the stars from your location at any time of the year. They are constructed from two plastic discs that are pinned in the centre and rotate against each other. One disc has the days of year around the edge, the other has the hours of the day and by aligning the current day to the current time, the map will show you what you can see.

Whichever technique you prefer, becoming familiar with the night sky is an essential skill for the budding astronomer. Start by identifying the big, bright constellations such as Ursa Major, Orion, Leo and Cygnus and the brightest stars – Regulus, Betelgeuse, Deneb, Altair and Vega – before moving on to the fainter ones such as Alcor, Mirach and Mirfak. Time spent here now will get you off to a flying start.

Step three: Subscribe to a magazine or a social media feed

If you would like to keep up to date with what is going on in the world of astronomy, find tips on which planets or stars might be particularly visible one night, learn about developments in observing techniques or even hear about new discoveries, follow astronomy information-providers on social media, such as Twitter and Instagram. You can even get a feed from @nasa.

If you prefer magazines, go for those published in the UK, such as Astronomy Now for night sky guides, second-hand equipment or event information. For more detailed, advanced information about equipment or techniques, choose Sky and Telescope.

Whether you intend to stick with casual stargazing or want to get more involved, a very enjoyable way to enhance your new interest is to seek out your local astronomy society. Observing with others can be far more satisfying than doing it alone. You will also get a chance to look through other members’ telescopes to see which type you might like to buy in the future.

Eventually you will want to make that all-important purchase and buy something to get closer to the stars.

Binoculars are cheaper than a telescope, easy to use and easier to sell if you find astronomy is not for you. They are defined by two numbers: 7 x 50, for example. This means they make objects look seven times bigger and the lenses used are 50mm in diameter (the aperture). Go for a larger aperture, such as 50 or 75, because a bigger lens collects more light, giving you a brighter image and showing more detail.

Magnification is different, though, when it comes to binoculars. Because they are usually hand-held, a large magnification will not only magnify the object you are looking at but also magnify the tiny movements in your hand, making detail very difficult to see. A magnification power of 7 or 10 works very well.

If you decide to buy a telescope, you will be met with a wealth of choices: reflecting or refracting, small or large, equatorial mount or alt-azimuth etc. Some have very precise and complex drive systems to counteract the rotation of the Earth making them great for photography, others may not have drives at all so are more suited to visual observing. Some will give a higher magnification so are good for spotting detail in planets, while others collect lots of light so are better for fainter galaxies.

Newcomers should choose a telescope that is a good all-rounder, as you may not know whether you have a particular interest yet. There is no point in spending lots of money on a telescope with a complicated drive and associated accessories for photography, if it turns out you just want to look at faint galaxies and star clusters.

A Dobsonian reflecting telescope is the perfect choice, in my opinion. They are easy to use and can be picked up for a few hundred pounds. Seek out a 150mm or 200mm (aperture) dobsonian, such as the Skywatcher Skyliner 150p at around £200 and you will soon be picking out planets, galaxies and star clusters. As your interest develops, you can then upgrade to a different telescope that is more suited to your particular interest.

Apps for phones and tablets are useful for helping you find your way around the sky. There are loads on the market for iOS and Android devices, but I recommend Sky Safari 6, Star Walk and the free GoSkyWatch Planetarium.

With each one, you simply hold the phone up to the sky with the screen facing you to reveal what can be seen in that direction. You can also fast forward a few hours, days or even years to discover what you will be able to see in the future, or tap on objects for information about them. You can turn the screen red to help maintain your dark adaptation and you can also connect the phone to a compatible telescope drive, which you can then control from your phone.