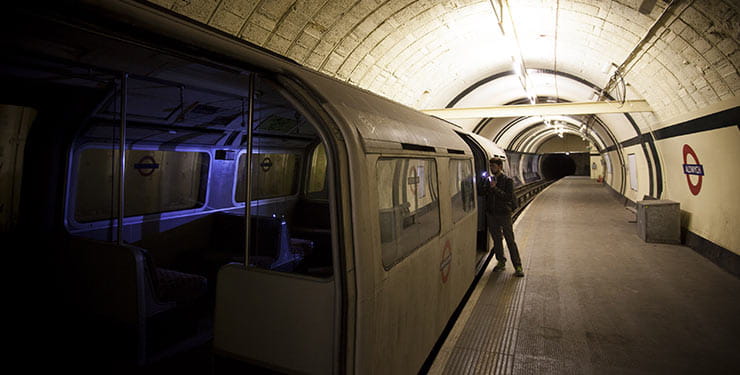 Hosted by self-confessed ‘Tube geek’ and broadcaster Alex Grundon, each episode is a light-hearted, informal discussion with members of the Museum’s Hidden London team. Viewers can tune in to hear about their work creating tours of secret sites across the Capital, and the intriguing tales and historical facts they have to share about these fascinating places.

This episode is the last in series one of our Hidden London Hangouts! In this episode, Chris, Laura, Siddy and Alex recount their favourite moments over the past 10 weeks, from reaching the top of 55 Broadway, London's first skyscraper to venturing into the maze of tunnels at Moorgate. There are a huge number of secret stories the team are excited to revisit.

The Hidden London Hangouts team ventures into Moorgate, one of London's first Underground stations. The station originally opened in 1865 as Moorgate Street, but various re-designs and upgrade works over the years have left a maze of disused tunnels and tracks for the team to explore.

It's time to venture into the Heart of London as the Hidden London team talk about Piccadilly Circus, one of the finest examples of subterranean architecture on the Underground. With a station history dating back to 1906, Piccadilly Circus now serves over 40 million passengers a year.

Ready to head into the wilderness? In this episode of Hidden London Hangouts, the team venture to Highgate station in north London. Planned to be a bustling interchange as part of the Northern Heights project, parts of this station now lie deserted in a secluded vale.

A slight change of direction for this episode, as the team focus on the marvellous world of moquette! You’ll get the chance to hear from designers from two high-profile design studios, Wallace Sewell and Camira Fabrics, as they discuss how these iconic designs are created and manufactured.

The team turn their attention to Euston station. From its humble beginnings on the corner of Melton and Drummond Streets, to its brand-new future as the London terminus for HS2, Euston station has an intriguing history and future to reveal. It is also the perfect tour to see a gallery of preserved vintage advertising poster fragments that haven't been seen by the public for 50 years.

The team go up instead of down in this episode, and explore London's first skyscraper, 55 Broadway. As London Underground’s iconic headquarters, this building was considered radical and offensive when unveiled in 1929, but is now classified as a Grade I listed marvel of art deco London.

This episode is all about Down Street - a disused station between Hyde Park Corner and Green Park, which has become known as 'Churchill's secret station'. It was transformed into a bomb-proof bunker from which the nation's railways were coordinated during the Second World War, and where Prime Minister Winston Churchill secretly took refuge at the height of the Blitz.

Hear extraordinary stories of those who sheltered at Clapham South from the Second World War onwards, including Caribbean migrants arriving on the Empire Windrush.

The Hidden London expert team takes you behind the scenes at Charing Cross station. Explore the station’s history and find out how it came to be used as a filming location for popular TV shows and blockbuster films, among other things.

Discover the history of Aldwych station ‐ one of London's secret places, holding myths and memories of times gone by.