Back to Saga Money
Equity Release
Here to help

Which UK cities are ready for the electric car revolution? We polled drivers across Britain in our search for the most EV-friendly city.

Which UK cities are ready for the electric car revolution? We polled drivers across Britain in our search for the most EV-friendly city.

For millions of us, looking after our health (and the planet) simply makes sense. Electric vehicles (EVs) mean cleaner air, cheaper running costs, and increasingly, convenience, thanks to a growing network of charging points. And the public are voting with their foot pedals: in the third quarter of 2021, the number of ultra low emission vehicle (ULEV) registrations in Great Britain rose by 40% year-to-year.

But which city is the UK’s electric car capital? We polled 1,529 UK car drivers for their thoughts on electric vehicles, and dug into the data to see which city is best equipped for the electric era. 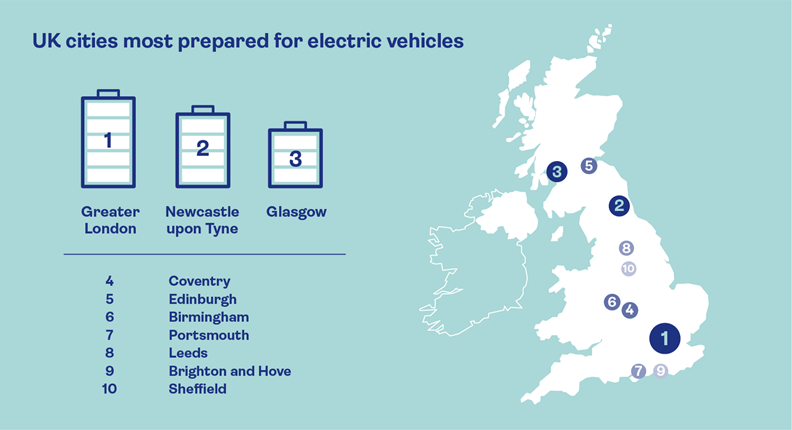 Change doesn’t happen overnight, but our survey found that positive sentiment towards electric cars is almost universal. More than two-thirds (68%) of people said they’d consider switching to an electric vehicle (EV), including 72% of men and 65% of women. And this feeling was shared across all age groups. 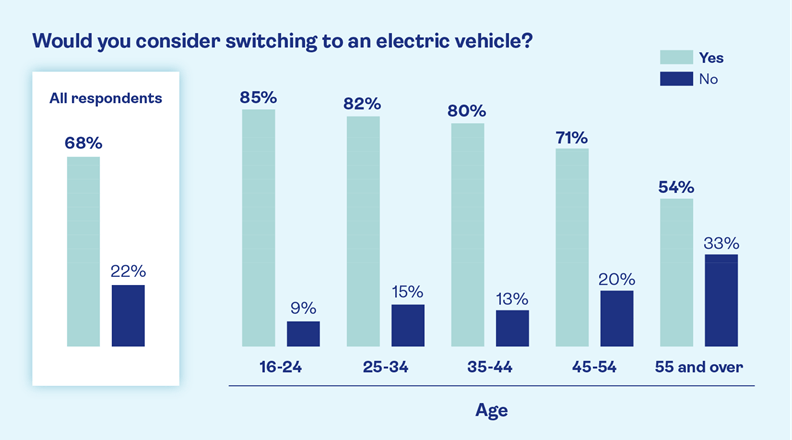 But if we look under the bonnet, there were differences in outlook across the regions. In Scotland, 80% of Glaswegians said they’d consider switching to an EV, compared to 59% in Edinburgh. And in England, people in Greater London were most likely to consider an EV (77%), compared to 61% in the north-east.

The landscape for electric vehicle ownership has changed. But just how far do electric cars go? Thanks to advances in technology, you can expect an electric car to travel around 195 miles on a single charge, according to an average of figures from the Electric Vehicle Database. Plus, the infrastructure is improving; as of January 1st 2022, there were 28,375 public EV charge points in the UK, while numerous cities across Britain (such as Bath, Birmingham and Portsmouth) already have clean air zones, with more to follow in late 2022.

If the policymakers are responding to public demand, why exactly are we so keen on electric cars? Our survey suggests there are various reasons. 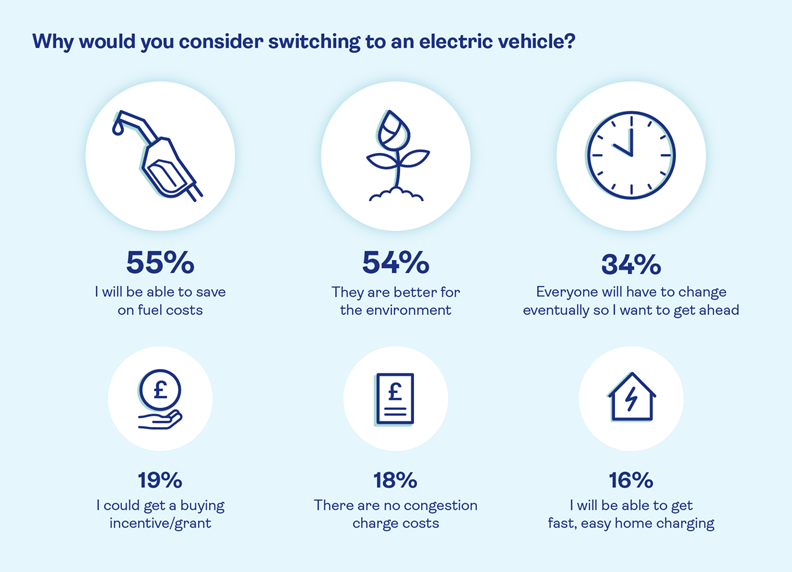 So, are electric cars good for the environment and how many people are considering switching for this reason? There is often talk of a so-called generational divide, but when it comes to the environment, consensus is king. The fact EVs are ‘better for the environment’ is the best reason to go electric, at least according to the youngest and oldest age profiles we polled – 45% of 16-24-year-olds and 63% of over 55s. And almost a third (32%) of all respondents said that driving an electric vehicle is among the top three positive things you can do for the environment.

Getting an electric vehicle is about doing our bit for the planet, but also our pockets. We asked our respondents whether they thought petrol/diesel or electric cars are pricier to run. The results were emphatic.

Across the board, those we polled were keen on the money-saving potential of embracing electric cars. But over-55s were the most likely (63%) to say that electric vehicles are less expensive than petrol or diesel. And when we asked all our respondents to guess the price difference between electric and fuel, the mean estimate was 5.58p per mile.

Our survey found widespread enthusiasm towards electric cars. When asked if they would switch to an electric vehicle, there was a resounding yes in cities like Liverpool (73%), Norwich (73%), Nottingham (73%), Belfast (71%), Birmingham (69%) and Brighton (69%). And when asked when they expected to switch, the mean average time across all respondents was 3.32 years.

But despite the positive sentiment, there are roadblocks in the way. 50% of respondents (and 62% of over-55s) said their city was ill-equipped in terms of the availability of public charging points. And that’s not the only barrier. 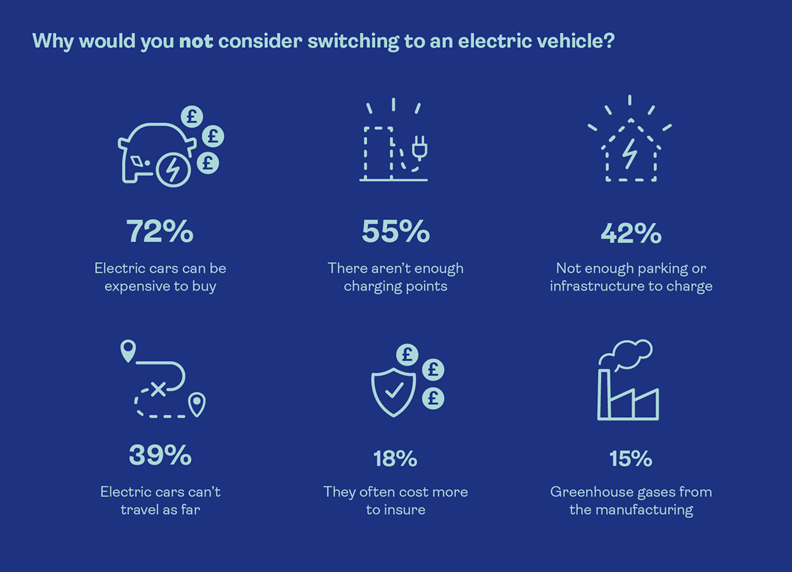 Clearly, there is no shortage of enthusiasm for electric cars. But is there a shortage of charging points? While the UK is currently adding around 7,600 public charge points annually (based on figures between January 2021 and January 2022) there are regional imbalances. For example, 32.4% of charge points in the UK are located in London, and in areas like Yorkshire and the Humber, the number of on-street chargers per head is a quarter of those in the capital.

Of course, the number of charging points is just one way of measuring the electric car credentials of a city. Accenture Strategy have forecast that more than half of all vehicle sales will be EV by 2040, so we wanted to know: which UK city is best prepared to meet this bright electric future?

To find out, we started digging into the data to draw up a table of the most EV-friendly cities. We considered a range of factors in each location, such as:

We found a range of sources – from scrawling through Zoopla for properties with off-street parking, to analysing publicly available data from the Department of Transport. After crunching the numbers – and factoring in population size – here is our table of the most electric-ready cities with their own unique score. 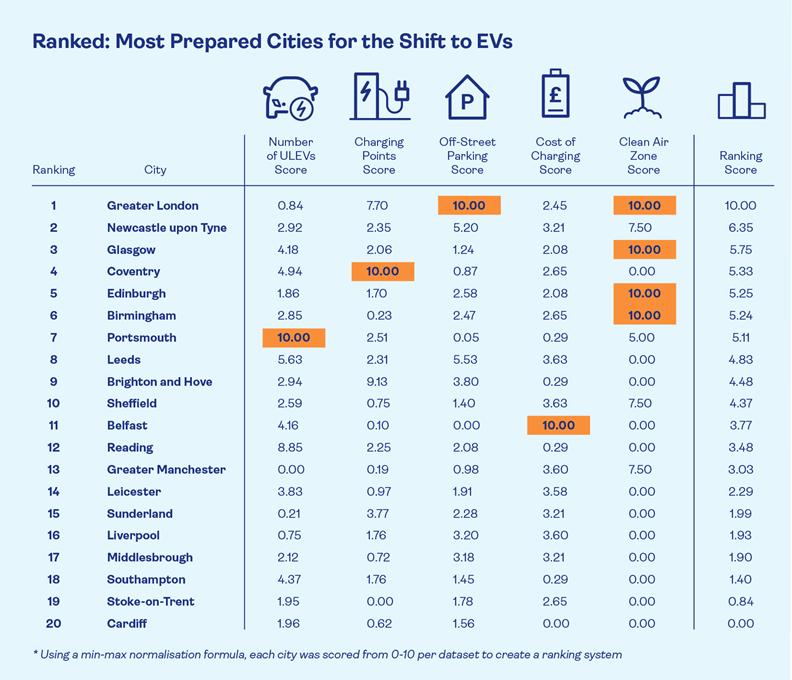 The future is bright

As our survey suggests, the British public have had a lightbulb moment on electric cars. Increasingly, Brits of all ages, genders and localities see EVs as a green and cost-effective alternative to gas-guzzling motors. The UK government has pledged £620m in EV grants and infrastructure, but as things stand, by 2030 we’ll need more than 10 times the number of charge points than currently exist today.

There are electric avenues throughout the land, but until every driver is able to plug-in and push the EV accelerator, there is plenty of progress to come. While our relationship with cars is changing at the speed of light, one thing hasn’t changed: the importance of staying safe and secure on the road.

Saga’s electric vehicle cover is built for this greener future. With Saga Standard, Saga Select and Saga Plus, you can protect the essential elements of your electric car – from the battery to the charging equipment – if they’re damaged due to an accident or fire.

Find out more about our electric car insurance and drive with low emissions and low stress.

Are electric cars as reliable as petrol and diesel? Battery life needn’t be a barrier to switching

How do you know if your electric car charge is enough for your journey? We help you work it out

How much does it cost to charge an electric car, and how easy is it to stay topped up as you drive?

When you’re choosing a new car fuel type is important, but is it better to buy petrol or diesel?