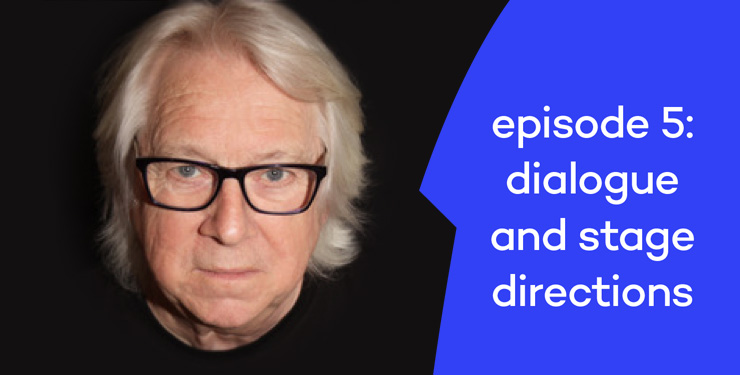 So far we have talked about the idea, plot, characters and story structure. This session is all about dialogue and stage directions.

Before we continue, here are the answers to last session’s trivia questions, which were about figuring out the novel from its opening line:

Dialogue is, of course, an essential ingredient in plays, TV dramas, comedies, films and novels. That’s not devaluing the crucial need for good stage directions.

The elements that constitute good and vital dialogue are…


Authenticity means it has to sound real. Phrases, idioms and expressions should fit the character and their environment. If the character is London born and bred, then the words they use must be consistent with a person with that background. Simply – they would never use words like ‘snicket’ or ‘ey up.’ (A ‘snicket’ is an alley way and ‘eh up’ means watch out – both peculiar to Yorkshire.) If you need help then try listening to the real thing – in a pub, on the radio or a download, or wherever, to pick up the way a person speaks.

Hearing the voice of the character. Every character has their own tone and own rhythm. A person can say the exact same words as another, but because of their individual speech pattern the meaning is totally different. You have to hear the character you’re writing. If you were working on a long running TV show, you would naturally start to ‘hear’ the main characters, the rhythm and the vocal quality of the actors.

The dialogue should never be forced just to accommodate a story point or a joke. The plot/story needs to come out naturally in the conversation. If you ever try and force something in, which every writer has tried to do now and then, it really sticks out like a sore thumb. Listen to how people talk with each other, not in nice neat sentences, but nevertheless there is a flow. Find ways of using the dialogue to tell the story. Say it out loud, see if it’s working. Get someone to read it with you, or better still get a couple of mates to read scenes – see how they sound. And if these mates happen to be actors, amateur or professional – so much the better.

Here’s a quick example of some stage directions from a film script.

EXT. GROWLER CAB. DRIVER’S SEAT - NIGHT
The rain is lashing down into the gnarled face of the DRIVER. He urges on his two horses with his whip, while screaming at them.

EXT. HORSE - NIGHT
The whip cracks over the heads of the horses. Their nostrils flare as their coats sweat and their muscles strain to go faster - the noise still deafening.

EXT. GROWLER/COBBLED STREET - NIGHT
And there is the cab careering along the rain drenched, empty cobbled street. In the distance, silhouetted by the moonlight, is Windsor castle. The Driver constantly cracking his whip ...

INT. GROWLER CAB - NIGHT
Being buffeted from side to side are ADAM ADAMANT and LADY CONSTANCE LYDIA BLACKWELL and Constance’s MAID - MARTHA. Adamant is the epitome of a Victorian gent, dapper, refined, erect and complete with swordstick. He stares intensely out of the window. Constance in any century would be beautiful. Refined features, an air of confidence mixed with vulnerability and despite the ‘unsexy’ Victorian garb complete with bonnet, she still somehow is sexy. Martha’s just sixteen and is clinging on for dear life as the carriage throws her about.

So, the idea is, do it as succinctly as possible.

Weekly assignment: Choose two or three possible scenes from your ‘treatment/short story’ and practice writing the dialogue for those scenes. Read it out loud, preferably with another person, and if possible, get a couple of people to read them while you listen and decide what’s working and what isn’t. Re-write to improve. There is no shame in re-writing.

And remember the three rules: