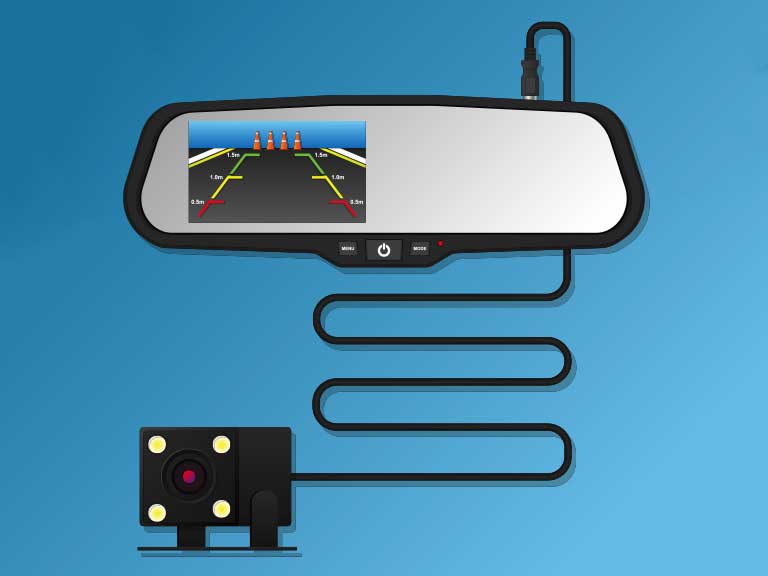 From brighter lights to brakes with bite, to battery boosters, Carlton Boyce chooses his best-buys to bring you peace of mind at the wheel.

The improvements we’ve seen in car safety in the past few years have been astonishing, and they’re only going to accelerate over the next decade. Volvo, for example, says that no one will die in any of its new cars by 2020, a lofty aim that other car manufacturers are sure to follow.

But drivers of older cars needn’t feel left out. There are a number of products that can be retro-fitted to make them safer, too. Here are some smart add-ons and ideas to bring you greater peace of mind on the move.

Even though you can’t interact with your phone while you are driving, having it held firmly in place stops it flying around the car in an accident and means you can see it easily, which is essential if you’re going to be using it as a sat-nav.

I love Quad Lock, a range of smartphone cases and mounts for cars, motorbikes, and cycles. Prices vary, but a complete kit including a case and a mount for a car costs around £65 and you can get 10% off your first order if you buy direct.

While the headlights on most modern cars are a marvel of complex technology and lateral thinking, those of older cars can be less effective. However, the Philips RacingVision +150% range of replacement bulbs, which promise (as you might have guessed) 150% more light, scooped the top spot in an Auto Express test. You can buy them online from Amazon, or in your local Euro Car Parts shop for less than £25 a pair. Fitting is a DIY job in most cases, or your garage should be able to fit them for you in a few minutes.

European drivers who regularly have to cope with harsh conditions swear by winter tyres; they are so effective that a normal car fitted with them will stay mobile long after a four-wheel-drive vehicle has slithered to a halt. I’ve just bought a set of Cooper Discoverer M+S Sport tyres for my own car, confident they’ll keep me mobile, no matter how bad the conditions get.

At around £200-£300 a set, dedicated winter tyres aren’t cheap, but they will give you a greater safety margin even when the road is just cold and wet.

Hammer for your life

The Lifehammer is a bright orange hammer with a cutting edge built into it, designed to cut seatbelts and smash windows. I’ve installed one in every car I’ve ever owned. Thankfully, I’ve never had to use it (and hope I never shall), but if I’m ever trapped after an accident, my Lifehammer will help me and my passengers to escape. Nothing will give you greater peace of mind for under a tenner than this. Available from Amazon, Halfords and almost every car accessory shop in the land.

Most new cars can be ordered with a set of parking sensors, and this relatively small investment in digital technology makes parking in tight spaces so much easier than using your car’s bumpers as makeshift analogue sensors. If you fancy fitting a set to your car, these kits from Amazon and Argos give you an audible warning when you’re getting too close to an object. Keen DIYers should be able to fit them in a couple of hours.

All new cars are now fitted with an automatic tyre pressure monitoring system to alert the driver if a tyre starts to lose pressure. This has obvious safety benefits, not least that it gives you plenty of time to pull safely to the side of the road before the tyre can fail catastrophically.

I’ve been testing the Fit2Go Tyre Pressure Monitoring System, £79.95. It’s very easy to fit, as the windscreen-mounted display is solar powered, which means there’s no wiring. It’s not as comprehensive as some systems but it works well.

If your car doesn’t have Bluetooth connectivity, something like the Parrot MKI 9000 will let you make and receive calls on the move by using voice commands. This means you can keep your hands firmly on the steering wheel. The unit will also let you stream music, podcasts and audiobooks from your smartphone. It costs £149.99 and is straightforward to install; even I managed to fit one in a couple of hours using a £25 adaptor lead from Halfords. If you’d rather pay someone to do it for you, you’ll need to set aside another £100 or so.

A dashcam won’t necessarily keep you any safer – although the presence of one might deter a criminal or persuade an out-of-control driver to moderate their behaviour – but it is a useful thing to have in the event that things do go wrong.

I’ve been using a Nextbase dashcam for a couple of years and have been impressed. It fastens to the windscreen and is powered by your car’s cigarette-lighter socket, so there’s no wiring to worry about. It starts recording automatically and gives crystal clear footage from the front- and rear-facing cameras. The Nextbase 522GW Dash Cam, £149, is Which? recommended.

The most common cause of a car breakdown is a flat battery, and finding yourself stranded in a rough part of town or the hard shoulder of a motorway can be incredibly dangerous. This is why I keep a portable jump starter to hand.

At Halfords, the GB40 1000A NOCO Jump Starter, £99, is a powerful battery booster that doubles as a portable power source for recharging USB devices, such as smartphones.

The standard brake pads on your car will usually do the job very well indeed. But, for frequently braking hard from speed, you might want to consider an upgrade next time you need new pads. EBC Greenstuff brake pads have a very good reputation and offer better initial ‘bite’ and greater fade resistance than the pads your dealer would fit. A set of four will cost about 50% more than standard pads – a cost-effective alternative to the super-expensive new discs and callipers that traditional brake upgrades entail.

Many drivers have a well-founded fear of using public car parks, especially if they have to do so after dark. The Park Mark website lets you find car-parks that specially trained police assessors have judged as meeting the Safer Parking Scheme’s requirements, such as CCTV cameras, good lighting and secure fencing.

Park Smart does a similar job, only in this case it uses Home Office data to show the number of recorded incidents for each of the car parks on its database. Neither site charges a fee.

Bosch AeroTwin wiper blades are another Auto Express winner, offering a worthwhile upgrade compared with a standard set of wipers. Bosch claims its AeroTwin blades offer better cleaning, in addition to being longer lasting and easier to fit than more conventional items. This doesn’t seem to be hyperbole, as Amazon customers have awarded them a score of 4.9 out of 5. You’ll pay around £20 a set, which is only a little more than you’d pay for conventional blades.

Finally, for all its features, no car is safe in the hands of a bad driver, while skill and knowledge are far more important than any gadget, which is why I’m a member of IAM RoadSmart. It’s no exaggeration to say that its Advanced Driver Course revolutionised the way I approach driving. I am now far more vigilant, more able to anticipate and react to changing road conditions – and all for £149.

If you want to further build your skills, talk to CAT Driver Training, which offers a range of options that will build your technique to a Jedi-like level of competence. Prices start at around £500 for a day’s one-to-one tuition using your own car (£750 using a CAT vehicle), which isn’t cheap but I’ve paid for a couple out of my own pocket, and will go back for more.