Scandinavian Capitals - Save up to 35%

Back to Saga Money
Equity Release
Here to help 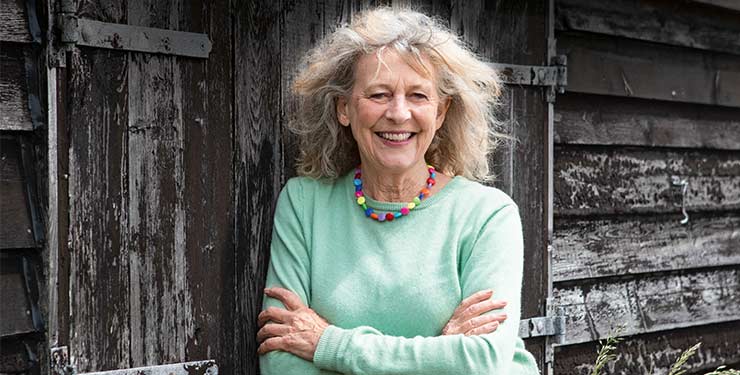 Age is no deterrent – Deborah Moggach

Rose Shepherd is a journalist and book reviewer.

I’ve been around the block a few times,’ says Deborah Moggach breezily. ‘I just got divorced for the second time.’

And there was I, fretting over how I might sidle up, crabwise, to the subject of her rather chequered love life. We are talking about her new novel, The Black Dress, which is both a delicious piece of mischief and a serious exploration of the ‘howling loneliness’ of the deserted older woman, so, naturally I have been wondering how much her central character has in common with the author.

I should not have worried. After all, this is Deborah Moggach OBE FRSL – the most frank, unpretentious writer, always on the side of fun. If her glass is ever half empty, you feel it will simply be the signal to crack open another bottle. At 72 she is a cheerleader for boomers, at the forefront of a growing genre that places older characters at the heart of the action.

Variously termed ‘boomer lit’ and ‘late bloomer fiction’ (boomers’ bloomers?), it mirrors young adult literature in dealing with transition. A faded beauty reliving the days when lovers wrote woeful ballads to her eyebrows just will not do it. Think rock ’n’ roll not rocking chair. Moggach did not singlehandedly pioneer the form, but her 2005 novel, The Foolish Things, and the hit film it inspired, The Best Exotic Marigold Hotel, blazed a trail. Starring Dame Judi Dench and Bill Nighy, the screen version follows a group of pensioners outsourcing themselves to a run-down hotel in Jaipur, there to discover that they are not too old to change or too scared to risk disappointment in a late bid for happiness.

‘When the film came out,’ Moggach recalls, ‘I’d go and watch it. Older people would come out of the cinema smiling. They’d seen a film about themselves that wasn’t entirely about incipient dementia.’

Then isn’t it a fact – unguessed at by our callow younger selves – that later life can be a blast? ‘As long as we’re not ill, as long as we’ve not got anything awful the matter with us, absolutely,’ Deborah concurs.

Old people in fiction have traditionally been the stuff of cliché. From sweet granny to mad old bat, they – we – have been largely othered. But as the ‘me generation’ finds itself, inexplicably, possessed of a bus pass, the autumn of life is taking on a rosy glow. Because, though we grow older, our essence does not.

‘I’ve written so many books where the age has moved up as I’ve got older,’ says Moggach, ‘and now that I’m 72 I realise one is exactly the same person one always was. A few more wrinkles, but the same jealousies and love and all that. What These Foolish Things did was to say that you don’t have to define yourself in terms of being old. If you’re up for adventure or a new life, age is no deterrent.’

Do we ever fully grow up? In The Carer (2019) we meet siblings Phoebe and Robert, insecure and rivalrous in late middle age, consigning their father, James, to the ministrations of loud, speak-as-she-finds, warm-hearted (but can she be trusted?) Mandy. Oh, the pettiness! The mistrust! The grievances! Who hasn’t been there?

Now, in a sparky coming-of-old tale, we meet Pru, 69, deserted by her husband and living alone in a big house in Muswell Hill, still on the lookout for a man. A glamorous black dress from a charity shop then proves the catalyst for some hair-raising romantic adventures, after Pru starts gatecrashing funerals. ‘She’s a less nice, more neurotic and fairly deranged version of me,’ Moggach confesses. ‘I’m not like her in many ways, but she comes from somewhere very familiar.’

And from where, actually, does Deborah Moggach come? The third of four sisters, she was born in 1948, in Bushey, Hertfordshire. Her parents were writers, and distinctly outré, sunbathing naked when they were not rattling away at a typewriter. Her father, Richard Hough, was a military historian, her mother, Charlotte, wrote and illustrated children’s books. Did Deborah dream of becoming a published author? ‘No, because my parents wrote so many books. My father wrote 120, and my mother wrote about 40, so, you know, you don’t want to do what your parents do, you want to be a rebel.’

Catch up on Saga's exclusive live event with Deborah where she talks about her new novel The Black Dress. Watch on Demand now.

After university she trained as a teacher, then met her first husband, publisher Tony Moggach, while working at Oxford University Press. They lived in Pakistan for two years, where Tony ran OUP in Karachi while Deborah wrote articles for Pakistani newspapers and embarked on You Must be Sisters. ‘The thing of being deracinated is so liberating, if you’re away from your comfort zone, and also away from people looking over your shoulder and saying, “Ooh, you scribbling away again? Am I in it?”’

Back in Camden Town, as mother of Tom and Lottie (he is today a teacher, she a novelist; both are journalists), Moggach followed up with Close to Home. In 1984, she left Tony for the twice-divorced cartoonist Mel Calman, her soulmate, 17 years her senior. They never lived together, but she would see him two or three times a week and has described their ten-year relationship as ‘one long conversation’. It was a head-to-head, a heart-to-heart that ended abruptly when his big heart gave out at The Empire, Leicester Square, where they were watching Carlito's Way.

She has not spoken much about the trauma, except to say it helped that people were so kind. She has been more vocal on the ordeal, in 1985, at the Old Bailey, of seeing her mother convicted of attempted murder for assisting an elderly, very ill friend, Annetta Harding, to take her own life in her sheltered housing in Primrose Hill – an act of pure compassion. Charlotte Hough was taken from the dock, ‘like Orpheus disappearing into the underworld’, and would spend six months in prison, an experience from which she would not really recover. ‘Yes, that wasn’t that great,’ says Moggach with irony when I mention it. Tellingly, she is a patron of Dignity in Dying, and advocates for a change in the law on assisted suicide.

Shortly after Calman’s death, she met Csaba Pasztor, a Hungarian painter 15 years her junior. He moved in with her and they were together for seven years. She then married journalist Mark Williams, whom she had met online, and moved to Presteigne in the Welsh Marches. So, yes, she has ‘been around the block a bit’, but even that has its pluses.

'There are advantages in having different lives with different people'

‘If you have several incarnations with different people, it contributes to the feeling that you’re living a long life. It’s like going on a two-centre holiday, it feels much longer than staying in the same place.’ Just because a relationship has run its course, she reasons, it does not necessarily mean that it has failed. Indeed, although separated, she and Mark spent the first lockdown together in Wales. ‘It was actually really nice, because we didn’t have marital expectations of each other. We were relieved that we got on all right, and it was nice to have a companion.’

She is not in the market now for online dating, but should the right someone come along… ‘Having said there are advantages in having different lives with different people, and having these extraordinary relationships, there are also huge advantages about finding your absolute soulmate. I envy people who still have things to talk about. I have friends who have been married for 40 years, and they’ve put a sofa in the bathroom because they like to talk to each other when one of them is in the bath. I told them I felt the most terrible stab of envy, because, except with Mel Calman, I’ve never had a relationship where we just chatted.’

Is she ever really lonely? ‘No-o, but I don’t like waking up alone, or coming home in the dark to a cold house.’

It was in lockdown one, in Wales, that she launched herself into The Black Dress. She still gets a buzz from writing. ‘When it’s going well there’s nothing like it.’ Can she ever imagine giving it up? ‘To tell the truth, I can, just because I can’t think of anything at the moment. The publishers won’t be pleased to hear that,’ she says wryly. And then, ‘I’m sure another novel will well up.’ I’m sure it will.

For the moment she is in East Kent, spending time with family, ‘hunkering down and happy to muck about with my grandchildren. I’ve got three and I see lots of them and adore them.’

So, there’s no new novel on the boil and no love interest, but doesn’t that just mean a new chapter is about to start? She has only to turn the page.

The Black Dress by Deborah Moggach is published by Tinder Press on 22 July, priced £16.99.

Disclaimer The opinions expressed are those of the author and are not held by Saga unless specifically stated. The material is for general information only and does not constitute investment, tax, legal, medical or other form of advice. You should not rely on this information to make (or refrain from making) any decisions. Always obtain independent, professional advice for your own particular situation.

Britain's bestselling monthly subscription magazine! Bright, entertaining and informative, each issue covers a large and eclectic range of topics for you to enjoy all year round.


Rose Shepherd is a journalist and book reviewer.

Britain's bestselling monthly subscription magazine! Bright, entertaining and informative, each issue covers a large and eclectic range of topics for you to enjoy all year round.