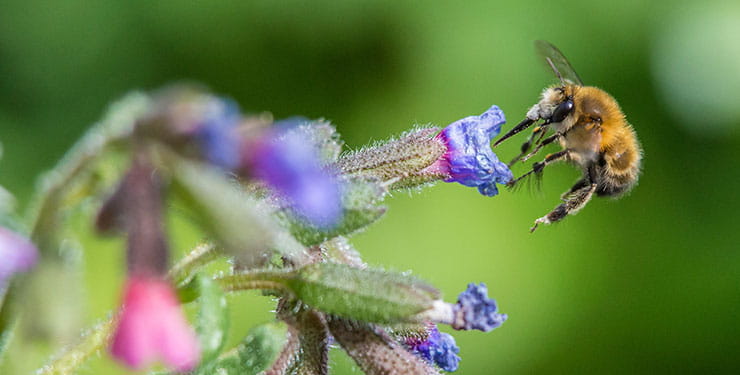 Allotments, parks and burial grounds are all ripe for a resurgence of bees if managed sustainably.

We’ve all been dreaming of the freedom of the open road over the past year, but it turns out we’re not the only ones. Bees need their own insect superhighways to get around – albeit filled with wildflowers rather than tarmac.

A network of B-Lines (B for biodiversity) or beelines is currently taking shape the length and breadth of the country, thanks to the work of charities and an army of volunteers. These are ‘roads’ of flower-rich grasslands with ‘stepping stones’ of green that link them, a bit like tiny motorway service stations for bees and other pollinators to rest and feed on their journeys.

The charity Buglife has been working on the project for ten years so far and recently launched its first B-Lines map of the UK, showing where flower-rich habitats exist, or could be created or restored.

It’s much needed. Numbers of bees have declined drastically in the past 50 years. One of the problems is that they – and other pollinators – are becoming increasingly confined to tiny fragments of land and can’t move freely because of the lack of habitat to sustain them; we have lost 97% of our meadows since the Second World War.

‘Bees are disappearing eight times faster than mammals and birds,’ says Paul Hetherington from Buglife. ‘We need to mobilise individuals and government to act now – and we think B-Lines are an imaginative and beautiful solution.’

Many B-Lines are along the existing infrastructure of railway lines and motorways, where train operators, local councils and hundreds of volunteers are joining forces to plant up roadside verges, platforms and roundabouts. How much nicer is it to look out of the train or car window at a swathe of wildflowers rather than a strip of rye grass?

It’s not just effective in rural areas, either. When an area of bare grass in Cardiff city centre was restored with pollinator plants in 2019, Buglife Cymru conservation officer Liam Olds spotted what looked like an interesting insect. It was later identified as a shrill carder bee, once common but now known only in a handful of sites in south Wales and southern England. It’s hoped numbers will continue to rise this year.

Dozens of groups across the UK are working together on beelines. Kent Wildlife Trust had already created a network of roadside nature reserves and in 2017 joined with the County Council and Swale Borough Council. They have, to date, completed 13 beelines, covering a total of 12.1 hectares (30 acres). Two-thirds of the area is cut and one-third left uncut, providing a refuge for overwintering insects and potential nesting sites for bumblebees. This also encourages a more diverse array of flowering plants to establish and, for the first time, bee orchids have appeared on site.

‘Bees are disappearing eight times faster than mammals and birds.’

Volunteers like Sue Trueman plant and maintain the areas. ‘My first venture involved cutting and raking grass during storm Eric in 2019, and I have attended many days since – experiencing the hottest day last year whilst carrying out botanical surveying,’ she says. ‘The group has a wealth of knowledge and I am now addicted to being outside and I find beauty in the tiniest of living things.’

We all depend on bees for the food we eat – we wouldn’t have apples, strawberries or tomatoes without them. Our crops are pollinated not only by honeybees but by 270 species of wild bees in the UK. It is estimated that this free service is worth £1.8 billion a year to British farmers, which is how much it would cost for humans to do the same job. But if we don’t act now to protect them, 41% of them could be gone by 2050, according to Buglife.

The main reasons for the drop in numbers are habitat loss due to development, climate change, intensive farming and pesticide use. Scientists have detected that climate change is disrupting bee nesting behaviour and their emergence after winter. And intensive farming, with increased use of chemical sprays, has had a devastating impact.

Beekeeper Dr Luke Dixon, director of the Bee Friendly Trust, looks after rooftop hives for the Bank of England, Natural History Museum and the Royal Academy of Music. When he is not on apiary duty (or working in his other role as a theatre director) he is installing planters, flowerbeds and bug hotels for pollinators on platforms at railway stations – working south to north and now steaming ahead towards Durham. ‘The rail infrastructure is perfect for the beeline project,’ he says.

Many routes can be found alongside motorways, roads and railway lines where bees can rest and feed on their journeys.

Dixon points out that we can all create a micro nature reserve, even on the tiniest patch of land. ‘Anyone can join the dots with a pot of lavender on a windowsill. You could plant a sprinkle of wildflower seeds on the edge of a lawn or have a patch of wildness in the corner of your garden.’

Working with the Wildlife Trusts to reverse the decline in bees is Dave Goulson, professor of biology at University of Sussex and Britain’s ‘Mr Bumblebee’. Bumblebee numbers more than halved between 1960 and 2012. One project Professor Goulson is connected with, ‘On the Verge’ in Stirlingshire, involved planting wildflowers on 30 sites, resulting in 25 times more flowers and 50 times more bumblebees, compared to adjacent grass areas that were mown.

However good this is, he is convinced that we also need a commitment from the Government. He is hopeful that the Agriculture Bill currently proceeding through Parliament could bring about real change, as it calls for subsidies to be redirected from the old CAP system (Common Agricultural Policy) based on acreage, to wildlife-friendly practices.

In the meantime, we can all help the bee cause. There are 1.2 million acres of gardens in the UK, an area larger than all our nature reserves, according to the Wildlife Trusts. Turning your plot into a sanctuary for bees can be as simple as leaving a few dandelions in a corner, planting more herbs, and not using chemicals.

Allotments, parks and burial grounds are all ripe for a resurgence of bees if managed sustainably. Many cemeteries contain ancient grassland, full of nectar-rich flowering plants, and the charity Caring for God’s Acre helps to maintain them. By simply changing a grass-cutting regime in Shrewsbury Cemetery, and allowing flowers to set seed, hundreds of pollinators have been recorded.

The good news is that insect populations can quickly recover, given the right conditions. It may mean the Government taking unpopular decisions, but as Professor Goulson says: ‘If we get it right for insects, we get it right for everything else. Insects are the canaries in the coal mine – their collapse is an alarm bell that we must not ignore. Action is needed from every section of society – we all need to change this together.’