I was there... as a Bluebell Girl 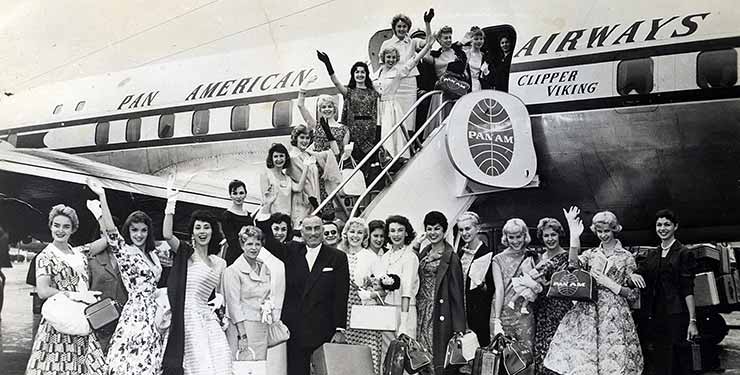 Miss Bluebell will audition girls to go to Las Vegas in June 1958 to open the Stardust Hotel,’ the advert said. I was 21 years old and desperate to go to America: this was my big chance.

I grew up in the village of Grassington in the Yorkshire Dales and always wanted to travel. I trained as a hotel receptionist after leaving high school as I thought it would be a good way to see the world. But that only led as far as London, so I became an au pair in Paris instead.

After nine wonderful months looking after three young girls, I went to stay with my sister Anne in London. I then had my first taste of show business – as a showgirl at Murray’s Cabaret Club in the West End. I had no idea what I was getting into, but the girls were very kind and taught me how to do my make-up and handle the men. I have since found out the club was famous – Christine Keeler later worked there – and they were high-class ‘ladies of the night’. How could I be so naive?

A matter of weeks later I saw the ad for Bluebell Girls in The Stage newspaper. I had often been told in Paris that with my height – 5ft 10 1/2in – and curves in all the right places, I could easily get a job with the renowned cabaret troupe based at Le Lido de Paris.

At the audition, Miss Bluebell took all my particulars. I walked up and down, did a few pirouettes and then she asked me to take off my sweater. I didn’t know there was such a thing as topless showgirls, but I was so excited about the prospect of going to America and being paid enormous amounts of money (my final salary was $190 a week, about £75), I didn’t give it much thought.

I was offered a contract on the spot but even though I was thrilled I said I needed to speak to my parents first. Miss Bluebell said she would be happy to meet them the following week in Leeds.

My poor parents did not know what had hit them, but Daddy spoke to his solicitor who advised him that I needed an Equity contract. I’m sure neither of them had a clue what they were talking about, but my parents duly asked Miss Bluebell whether this would be possible. When she said, ‘Oh absolutely’, they heaved a sigh of relief. Of course, had they known I would be topless, they would never have allowed me to go (I only told them years later).

First though, I had to go to Paris for rehearsals, which was wonderful as I spoke fluent French and knew the city well. Of the 28 girls – all over 5ft 8in – 12 were showgirls and our job was to swan about looking glamorous while the 16 dancers, plus 12 American male dancers, had to work incredibly hard. Most of the girls were from the UK, but there were a couple of Germans, Dutch and French.

Then all the costumes had to be made. Every girl had her own, made to measure, no expense spared. We had to ‘knock ’em dead in Vegas’ – and we did.

After six weeks of preparations, we flew to Las Vegas via New York. Two aeroplanes were chartered – one for the scenery, props and costumes, and the other for the cast and crew. The heat hit us immediately and we were met by a battery of TV cameras as this was the first big show to come to Las Vegas from Europe.

Although still under construction, all the girls were initially booked into the Stardust Hotel for a few nights. I remember stepping out of my room and sinking into sand. In 1958, Las Vegas was rather like the Wild West. Between each hotel were huge tracts of desert and the town was controlled by the Mafia.

Because the air conditioning wasn’t working properly, we rehearsed every night from 6pm to 6am when it was cooler. Fortunately, the apartment I moved into with three of the girls had air-con. We spent mornings sleeping and afternoons swimming, and I started going out with Bill, our stage manager.

Gradually the show began to fabulously fall into place, and we opened on 2 July with Bob Hope as master of ceremonies. Reuby, our star dancer, came on first, and I followed with Katinka. The room rocked when they saw moving topless showgirls in magnificent production numbers as this was the first time it had been allowed in America.

Not all numbers were performed semi-naked though. We had stunning costumes made from the finest silks, satins, furs and feathers. And the stage settings were incredible. There was a real swimming pool for the Roman number, an ice rink that came up on an elevator and the finale scene featured a huge model of the Eiffel Tower.

Soon the show was the talk of Hollywood and all the major stars flew up to see us: Rosemary Clooney, Harry Belafonte, Eddie Fisher, Debbie Reynolds, Clark Gable, Frank Sinatra, Ava Gardner, Judy Garland and Jane Russell to name but a few.

I remember Frank Sinatra and Dean Martin were sloshed and behaved obnoxiously during the performance, but afterwards Frank came backstage and said he had never enjoyed a show more.

On another occasion, Enid, our Bluebell captain, invited Nat King Cole backstage to meet us, but the security guards wouldn’t allow it because he was black. We thought it very unfair to treat such a big artist with such little respect and wanted to go on strike, but Nat King Cole diffused the situation by saying he had to go and meet a friend. Apartheid was as bad in America as it was in South Africa at that time.

After the shows (two a night, three on Saturdays), we were often invited to glamorous parties, such as Eddie Fisher’s birthday party, but at first some of the girls were overwhelmed by the star status we were given. They soon adjusted and most revelled in the limelight – I certainly did.

Being a Bluebell Girl opened a lot of doors. I met Marlene Dietrich, who had a crush on my boyfriend, on several occasions, and when Johnny Mathis was in a show at another hotel, I telephoned to invite him to my friend Anne’s birthday party and was put straight through. He said he’d love to come, and could he bring some friends? I thought, super, lots of lovely men. They duly arrived – and spent the entire night frolicking with the boy dancers!

Rock Hudson was another disappointment. He came to a show with some gorgeously handsome men, and we were so excited, but he ignored us. However, when the male dancers came on stage, his friends had to stop him from climbing up to join them.

After a happy year in Las Vegas and a promise to Bill I would return, a new show was brought in and we flew back to Paris. Then I took the train to Yorkshire as I was longing to see my parents, two sisters and brother again.

A few weeks later, when I’d come back down to earth, I started work as a receptionist in a Harrogate hotel. But I’d only been there for two days when I had a call saying one of the Bluebell Girls was sick and could I join them for a show in Beirut! Naturally I said yes, and all thoughts of going back to Vegas to marry Bill were soon forgotten.

Life in Beirut was a ball. Constant parties, wonderful dinners and trips to the mountains. After 11 months there, I still wanted to travel, so in 1961 I joined BOAC, now British Airways, as an air stewardess.

Working in first class, I met more famous stars and once refused a date with Cary Grant because he was very ungracious to a colleague. In retrospect, he was looking for a wife at the time so I could have had a very different life, but I don’t regret it. I had lots of adoring boyfriends and led a very glamorous life.

Unfortunately, I had to leave BOAC when I turned 36, as this was the age air stewardesses were deemed to be over the hill – outrageous now. So, my next plan was to get married. Soon afterwards, I met my future husband Bob, an American, and we married in 1972. Two years later, our son Chris was born, and I returned to Grassington with my family.

There I became artistic director of the Grassington Festival, concerts secretary for Skipton Music Society and a public speaker. In 2006 I was awarded an MBE for services to music.

Now I am a carer for my 95-year-old husband, and a grandmother, but I still give talks about my life. When I tell people I was once a Las Vegas showgirl, it never fails to raise a few eyebrows!

Abridged from Love and Laughter Around the World by Rowena Harker Leder, price £15. To order a copy, visit her website.