The former Woman's Hour presenter and author shares her no-nonsense views on life. 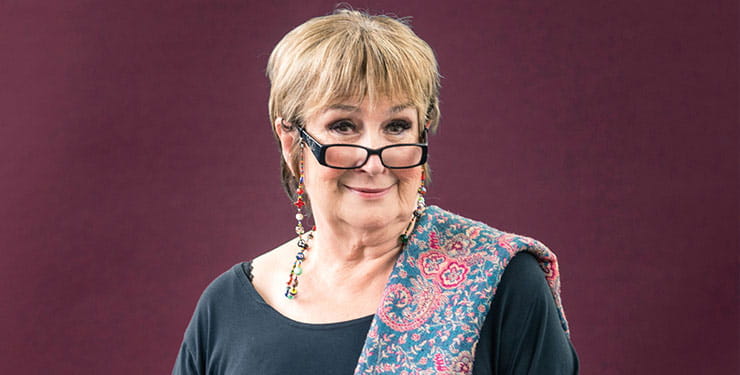 For 40 years I’ve spent a large part of my life in London, the sprawling metropolis famous for being unneighbourly. Of course, we’ve always had friends. They were people we’d met at work or, when the children were young, at the school gate, but I can honestly say that at our first home in South London, we knew hardly anyone.

Wendy and Victor next door would often chat over the garden wall, sometimes displeased at the racket the boys were making in the garden the size of a postage stamp, but I really don’t recall any socialising. Maybe a drink at Christmas.

When we moved out of London to the Peak District for the boys’ education, I had to spend part of the week alone in the capital in the basement flat I dubbed Wuthering Depths. I spent four days a week at the BBC. I knew the young woman who lived above me, but no-one else in the street apart from Alan Bennett.

He and I would have a brief interchange as I left at 6.45am on my way to Woman’s Hour and he was popping round to the paper shop. ‘Eeh, Jenni,’ he would ask every morning, ‘What’re you doing here at this time of day?’ I always had to remind him that the programme had moved from its 2pm slot to 10am, so I had to leave early. ‘Oh aye, have a good day.’ And off he would go.

I moved from there seven years ago to a little house in a cul-de-sac in Hampstead Garden Suburb and again found people would nod a ‘Good morning’, but little else. The only people I really got to know were Barbara and Chris who live at the top of the road. Chris is 80 and Barbara 76.

My first encounter with Barbara was in unfortunate circumstances. I’d been to work. It was 1 December 2015. There was ice on the front doorstep.

I slipped and found myself face down in the garden. My bag, containing my phone, was out of reach. I was like an upturned cockroach, unable to move and my left humerus was agonising.

I heard footsteps on the path and shouted, ‘Help!’ Barbara came to my side and announced she didn’t have the strength to help me up on her own. She called Chris and, together, they got me indoors and en route to the hospital. We’ve been the best of friends ever since, but I barely knew anyone else until the pandemic.

The one good thing about the virus has been the way it has brought people together.

It began with clapping for the NHS. There’s a WhatsApp for the street and the occasional, socially distanced, drinks do outdoors even in midwinter. We all became aware of Caryll who, in her eighties, had a fall down the stairs and is now ‘confined to barracks’. She gets regular phone calls and texts to check she’s OK and to cheer her up. Anthony, opposite, has a disabled wife and will often pop out for a chat when he needs a break from his arduous role as her carer. The kids next door are friendly and funny and always keen to say hello to the dogs first, and then me. I know who are favourites there.

Most marvellous of all are Victor, Masha and their daughter, Vera. They’re a Russian family whose first approach to us ‘oldies’ was to offer a shopping service. When they go to the supermarket, they bring back stuff too heavy for us to carry. Bottles of vodka have been most welcome. They brought me a homemade mask and a card for my 70th birthday in May and gingerbread for Christmas. Victor offered his skills as a handyman and, in the kitchen, while he installed screws for hanging pans, I made him tea and offered profuse thanks for his assistance.

‘Not necessary,’ he said. ‘My 70-year-old mother lives alone in St. Petersburg. I hope she has a neighbour who’s a fit young man who does for her what I do for you.’ Could I be more lucky?

I’m sure the tough times we’ve all been through have brought neighbours together all over the country. When we are able to ‘go back to normal’ let’s not revert to the old ‘keeping ourselves to ourselves’ philosophy and remember that good neighbours can be good friends.

The former Woman's Hour presenter and author shares her no-nonsense views on life.