Ray Mears – Born to be Wild 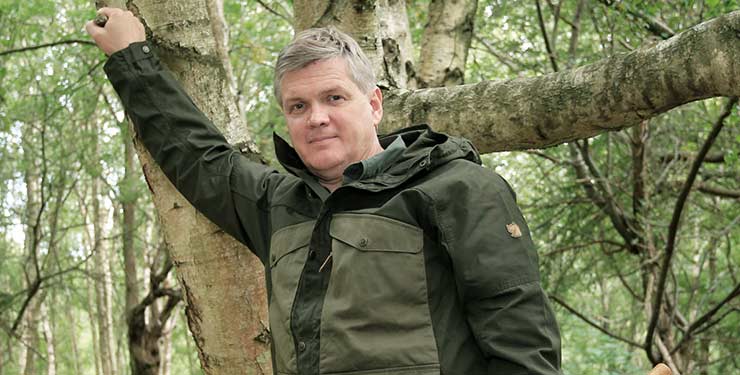 'There are so many benefits from the natural life that we can take into the urban life as well.'

Many have rediscovered the joys of nature lately, but Ray Mears always understood its power.

Ray Mears is looking forward to April even more than usual. It’s when the nightingales descend on the woodland around his home deep in rural Sussex, having migrated from their winter quarters in Africa. Their nocturnal serenade can be rather vigorous. ‘They were so noisy last April that sometimes I had to lean out of the window at night and tell them to shut up!’

It seems wrong to be chatting to the great outdoorsman via a computer screen. Since he arrived on TV with 1994’s Wild Tracks, Mears has become synonymous with getting outside, whether whittling sticks in a Sussex wood or tracking grizzlies through the wilds of British Columbia. Now, some 20 TV series later, he seems bemused by how the British public, frustrated by lockdown, have been rediscovering the great outdoors. In fact, his greatest challenge over the past year has been avoiding the crowds. ‘Sometimes I’ve had to wade across streams to escape,’ he says with a grin.

Mears is encouraged by how our nation has taken nature back to its heart but is not starry-eyed about it. ‘I think it’s great that people feel that connection. But I fear that we might swiftly return to our former way of life,’ he says. Most important, he believes, is that we act on this new-found enthusiasm – for instance, by better protecting our green spaces. ‘There are still too many chainsaws that start up late in the evening when the Forestry Commission has gone home,’ he points out.

In Canada for Northern Wilderness in 2009

His latest book, We are Nature, is a heartfelt reflection on what he’s learned from nature, as well as a practical guide to tracking and equipment. ‘What interests me is our vestigial wildness,’ he explains. ‘For 99.99% of our history as a species, we were hunter-gatherers. We’ve left behind that lifeway, which required us to use our sensory abilities to the full. And yet those skills are still within us.’

He describes his experiences with indigenous communities who still routinely use those skills. A desert Bedouin, for instance, who, having detected the scent of distant rainfall, urged Mears to ‘hurry before rain floods the wadi’, despite there not being a cloud in the sky. ‘It is not that we cannot smell things,’ he writes, ‘more that we do not choose to use our sense of smell.’ Closer to home, he describes a formative early experience when he caught the musky scent of a fallow deer in a hornbeam coppice and found that by focusing on this alone, he was able to track the animal to its resting place.

‘Part of the magic when we observe nature is tapping into these abilities. I’ve had the opportunity to work with many of the world’s first nations at a time when the elders had lived the old life.’

‘We were hunter-gatherers. We've left that lifeway...yet those skills are still within us’

In our more pampered culture, Mears now embodies this same tradition: a conduit for the communication of vanishing skills: ‘All of this is in me, and I’ve been trying to offload it on paper for the benefit of the next generation.’ Today’s reader may feel they can get through life without knowing how to, say, track a leopard, but Mears insists that the skills he encourages – an ability simply to sit still and silent, for example – are valuable anywhere. ‘There are so many benefits from the natural life that we can take into the urban life as well.’

It strikes me that Mears’ world is largely one of solitude, although he shares his life with his second wife, Ruth, and his stepson, following the death of his first wife Rachel to breast cancer in 2006. So presumably he’s been in his element during the lockdowns of the past year? Not entirely, it turns out. Travel restrictions have curtailed his globe-trotting, while social distancing rules have meant the postponement of the popular Woodlore bushcraft courses he runs. ‘I’ve also missed being able to have a coffee in London,’ he tells me, revealing a hidden cosmopolitan dimension. ‘I like the bohemian atmosphere. I’ve missed the meetings we have in tellyland.’

What’s next for Mears on screen? ‘I have all sorts of irons in the fire,’ he says. He was filming in China just before the pandemic broke, and was impressed by the wildlife (snow leopards, for starters) and the burgeoning local conservation movement.

Pandemic aside, Mears feels some ambivalence about TV. He dislikes what he describes as ‘fakery’ and ‘the sensational approach’ and has previously dismissed some younger TV rivals as ‘showmen’. ‘There’s a danger that if you only do television you become a sort of lobotomised puppet,’ he says. He stresses how seriously he has always taken his responsibilities. ‘Television has a much more profound impact than many producers would care to admit. This first dawned on me when I met a child who could quote every word I’d said in a programme, years after it was aired.’

‘I’m doing more of the things I want to do. I intend to wear out, not fade out’

At 57, Mears is a year older than I am. (‘Nearer to the vaccine!’ he quips.) I suggest that midlife might offer a welcome slowing down after the pressures of TV. He’s having none of it. ‘I’m pursuing things with more vigour – because, after 50, life seems finite. And now I’m doing more of the things I want to do; I’m turning over the stones I want to turn over.’ He describes how the debilitating experience of Lyme disease, which he suffered from for nearly 14 years (Mears is patron of tick-borne disease charity BADA-UK) has left him wanting to make up for lost time. ‘I intend to wear out, not fade out!’

So, are there wildernesses that have not yet felt the sturdy Mears hiking boot? Any apex predators that have so far eluded him? ‘I’ve never tracked a tiger,’ he says.

There may not be much chance of that right now, but every outdoors-lover knows that nature’s wheel turns and even pandemics come and go. Any day now, those nightingales will be back outside Mears’ window.

And next time you catch him on TV peering at a pawprint, don’t bet against it being that of a large stripy cat.

We Are Nature by Ray Mears is published by Ebury Press on 25 March, priced £20